The Tragic Death Of Siegfried Fischbacher

AVA
The world woke up a little less magical than the day before on January 14th, 2021, after news broke that Siegfried Fischbacher — one-half of the legendary Las Vegas magic show act Siegfried and Roy — died at around midnight the night before. The New York Times reported that the 81-year-old entertainer died of pancreatic cancer. His lifelong business and domestic partner Roy Horn died in May 2020, one of hundreds of thousands of Americans to succumb to complications of COVID-19. Siegfried released a poignant and prescient statement after the loss of his life partner:

"The world has lost one of the greats of magic, but I have lost my best friend. From the moment we met, I knew Roy and I, together, would change the world. There could be no Siegfried without Roy, and no Roy without Siegfried."

Siegfried and Roy stood out as pioneers in the world of Las Vegas showbiz. Their shows, which featured mind-boggling magic tricks accompanied by spectacular visual effects like lasers, smoke machines, sequined everything, and, of course, exotic animals like cheetahs and white tigers, captivated audiences throughout the 1990s. It was abruptly stopped after Horn was attacked by the pair's white tiger Mantecore in October 2003. Now that both Siegfried and Roy are tragically no longer with us, let's take a look at the sensational life the two led together, an adventure on which they took hordes of adoring fans along for the ride.

According to the Las Vegas Review-Journal, Siegfried and Roy's star-studded relationship began when they first met on a cruise ship in 1957. Siegfried was working as a steward/magician, Roy a waiter. Roy offered to assist Siegfried, then suggested that the two amp up their act with some animals a little wilder than rabbits and doves. When Roy told him that disappearing a rabbit was "ordinary" and asked him if he could make a cheetah vanish, Siegfried responded:

"In magic, anything is possible."

So Roy snuck a cheetah on board the ship and the two took the first step on their path to revolutionizing the magic show. Siegfried said,

"In show business, in order to be successful, you have to be different. And when Roy showed me that cheetah, it made all the difference."

The show was a huge hit on the high seas, and after finding success on cruise ships, the two took their act on land, showcasing in European nightclubs, cabarets, and theaters, including Paris' famous Folies Bergère cabaret music hall. But they had bigger and better things in mind, and in the late 1960s, they set their sights on that bastion of glitter and illusion: Las Vegas.

The sensational duo moved to Las Vegas in 1967, getting their first gig at the Tropicana. But Vegas back then was a much different town. It has grown into a family-friendly escape into an outsized simulacrum of actual culture today, but in the 1960s, it was still, as Siegfried told Vanity Fair in 1999, "a gambler's town, pure and simple."

It took them a while to fundamentally alter what audiences expect from Vegas shows, but they eventually did. They worked as a side act in various shows around town throughout the 1970s, and finally got the chance to headline their own full-length show in 1981. Beyond Belief ran for seven years at the Frontier, then in 1988, hotel magnate Steve Wynn built them a 1,500-seat theater at his latest hotel, The Mirage. From their first show there in 1990, they went on to sell out 5,750 performances that completely reimagined what could be done on a Las Vegas stage.

Siegfried and Roy's magic spectacle fundamentally changed what Las Vegas visitors expected from a floor show. Alan Feldman, head of The Mirage's PR department during that time, told the Las Vegas Review-Journal that it didn't just transform the idea of the magic show, it "had a broader impact on the Las Vegas show, period." The act's production cost a whopping $30 million — an unheard of amount in those days — and employed a cast and crew of 267 people. Feldman said,

"They were the first of anyone, really, to bring leading Broadway and West End designers and directors and choreographers into a Las Vegas setting to help stage a show. The creative team that was around 'Siegfried & Roy at The Mirage' was practically a who's who ... (of) incredible people who had an incredible list of credits."

In addition to leaving audiences awestruck, it also broadened the scope of who could go to a Vegas show, leaving behind the risqué cabaret-style shows for a more family-friendly model of visual entertainment. Siegfried said in 2013,

"That's what we started."

He and Roy made their final on-stage appearance at the Bellagio in February 2009, after Roy's long recovery from the 2003 tiger attack.

The Tragic Death Of Siegfried Fischbacher 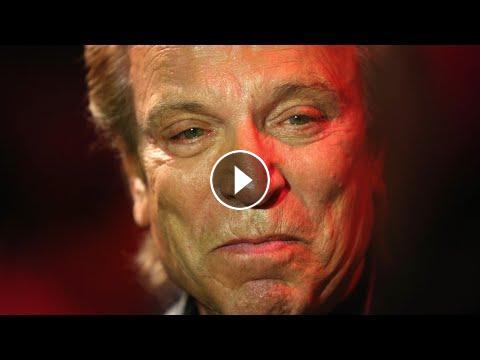 The world woke up a little less magical than the day before on January 14th, 2021, after news broke that Siegfried Fischbacher — one-half of the legen...