lily
(1) The Spy Wore Pink - Pink Panther becomes a spy and his mission is to retrieve a lost computer disk. (2) A Pink In Time - Pink Panther is an assistant to time travel scientist Big Nose, who's returned from ancient Egypt with a valuable cat statue. But when his dog breaks it and Pinky gets the blame, he decides to use the time machine to get the same statue. However, his use of the machine results in him going through various time periods, including prehistoric, ancient Rome, and eventually Egypt, where he's able to get the statue. After a brief stint in the future, he returns home to the present where he presents Big Nose with the statue. However, it shatters again, and Pinky finds he went to all that trouble for nothing since the scientist had several of the same statues in his cabinet. (3) A Pinker Tomorrow - In a distant, bleak, future, Pink Panther wakes up to a colorless world that's ruled by Big Nose's big-brained dog, who commands him to strip Pinky of his color after he finds himself able to spread color all over town. A battle ensues, and Pinky is victorious when he uses paint and music to get the better of the villains. He rejoices before losing his own color, only to find it was all a dream. Pinky is delighted to see the surrounding modern day neighborhood full of color with the lone exception being Big Nose's house, which he's painting gray. And it looks like he's being mentally commanded by his big-brained dog, who's lurking in the shadows.(4) Pink Pink Pink Pink - Pink Panther gets a fancy new music stereo system which he finds can duplicate any object that gets pulled into it. When he gets pulled in as well, three clones of Pinky are created, each of which has a distinct personality, all of whom become a huge annoyance to next door neighbor Big Nose. (5) Astro Pink - Space villain Big Nose shrinks several planets in the galaxy in order to make a personal marble collection. He collects a mound of soil from Earth before adding it to his collection as well. Pink Panther, who was in the mound, is the only one who's normal-sized enough to save Earth and the other planets against the evil space villain. Once he's accidentally sucked into space and dons a space suit, he's able to utilize it to escape Big Nose and restore the planets to their normal size, and becomes a hero in the process.
The Pink Panther is the sly, lanky animated cat created by Friz Freleng and David DePatie. The iconic feline was first created in 1964.
Subscribe for more Official Pink Panther content from MGM:
New episodes of will be uploaded every Monday, Thursday, and Saturday!
Own: (Amazon)
(iTunes)
Like:
Follow: 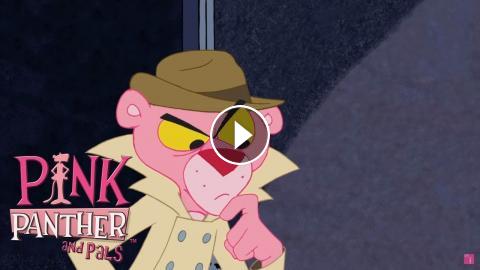 (1) The Spy Wore Pink - Pink Panther becomes a spy and his mission is to retrieve a lost computer disk. (2) A Pink In Time - Pink Panther is an assist...