What If Only One Baby Was Born in a Year

lily
Three hundred and sixty thousand babies are born every day around the world. But what if there weren’t quite so many? What if, for one year, only a single baby was born? It’s not necessary to get into the biology of how this would happen. So let’s just pretend the stork took a year-long holiday and forgot to call a sub.
The moment the first doctor makes an innocuous Facebook post about not having many new patients, the conspiracy train would get rolling. As scientists around the globe struggle to explain what just happened, people would come up with their own answers. Many might believe that it’s the beginning of the end of the world...
Other videos you might like:
No Boys Were Born In a Mystery Village for 10 Years
Here's What Your Baby Will Look Like &
10 Superpowers You Had When You Were a Baby &
TIMESTAMPS:
There would be mass hysteria 1:02
What if you were the only baby born in a year? 3:15
What about the long-term effects? 4:28
#whatif #demography #brightside
SUMMARY:
- No births for a year would be preceded by about nine months with no new pregnancies.
- Doctors who specialize in pregnancy are known as obstetricians, or OB-GYNs.
- They’d realize none of their colleagues are seeing any new pregnancies either, and it's only a matter of time until someone raises the alarm.
- Many might believe that it’s the beginning of the end of the world. That might sound farfetched, but mass panic has happened before over less real threats.
- Let’s say about ten months into the year without newborns, the world breathes a sigh of relief as the year’s first and only baby is born, happy and healthy. And for the fun of it, let's say that this baby is you.
- As the only baby of the year, you'd be a celebrity before you were even born. The whole world would know your name before you could even walk.
- Life isn’t just going to suddenly go back to normal after something like this.
- For starters, companies that specialize in things for babies would definitely have a rough fiscal year.
- While children can start eating solid food after about six to eight months, most won't be ready to ditch baby food entirely until they're around two.
- Where things get complicated is when it comes to education and healthcare.
- Maternity wards aren't going to see any use for about a year.
- Every year for twelve years, schools around the world would be missing almost an entire grade's worth of students.
- This could lead to teachers being laid off, potentially disrupting the education system for years to come.
- On the plus side, there’ll be less competition for you in getting into the dream college of your choice. Helloooo Stanford!
Music by Epidemic Sound
Subscribe to Bright Side :
----------------------------------------------------------------------------------------
Our Social Media:
Facebook:
Instagram:
5-Minute Crafts Youtube:
Stock materials (photos, footages and other):
----------------------------------------------------------------------------------------
For more videos and articles visit:

What If Only One Baby Was Born in a Year 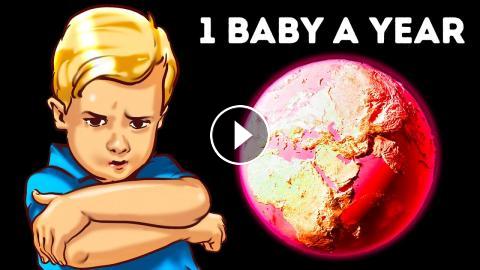 Three hundred and sixty thousand babies are born every day around the world. But what if there weren’t quite so many? What if, for one year, only a si...