AVA
Maya Angelou overcame more than her fair share of hardship to become one the most influential and popular authors in American history. This is the tragic - and ultimately triumphant - real-life story of Maya Angelou.

Maya Angelou was born Marguerite Annie Johnson in St. Louis, Missouri, on April 4, 1928. For the first years of her life, she was raised in California, but at the age of three her parents separated and essentially mailed her to her grandmother in Arkansas. She told NPR,

"They put me and my brother on a train, without any companionship, without any adult, put tags on our arms, and said, 'This child should be delivered to Miss Annie Henderson in Stamps, Arkansas.'"

Angelou credits her grandmother for raising her. But when she was just seven years old, things took a tragic turn. During a trip to St. Louis to visit her mother, Angelou was sexually assaulted by her mother's boyfriend. She told her brother, who told the family, who had the man arrested. When he got off with just a single day in jail, though, someone took the law into their own hands and murdered him in retaliation.

Angelou withdrew into herself. Convinced that saying the man's name had led to his death, she believed her voice to be, quote, "a killing machine."

She became mute, not speaking a word for five years. Instead, she turned to reading and literature, memorizing all the poetry she could find. She later told Smithsonian,

"I believe that my brain reconstructed itself during those years. I believe that the areas in the brain which provide and promote physical speech had nothing to do...And so, I've been able to develop a memory quite unusual, which has allowed me to learn languages, really quite a few."

Watch the video for more about The Tragic Real-Life Story Of Maya Angelou. 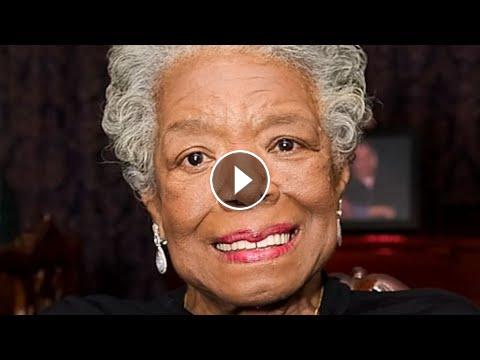 Maya Angelou overcame more than her fair share of hardship to become one the most influential and popular authors in American history. This is the tra...