HALF HUMAN / HALF ALLIGATOR FOUND - real or fake?

Added 2 years ago by Danielle
64 Views
Stop by my Facebook for daily "real or fake" pics and vids
Link to DDPYOGA
In this video we're looking into a very strange mummy that appears to be half human and half alligator. We're also looking at a very strange mouse with battle armor, a picture that claims to show a man who had his ears removed so he could look more like a parrot, and a picture that wants us to believe it really shows a photographer on fire!
Also in this video, I am finally addressing an issue that is always popping up in the comment section - my resemblance to Diamond Dallas Page, the former WWE wrestling champ. Watch my interview with Dallas where we find out what he thinks about all this and what he is doing these days... You'll be amazed
#ddpyoga
Diamod Dallas Page
real or fake
BillsChannel
More About Alligator Man
Jake the Alligator Man is an alleged half-man, half-alligator cryptid on display in apparently mummified condition at Marsh's Free Museum, a tourist trap in Washington Sate.. He was acquired by the Marshes for $750 in 1965 from an antique store.
His image was used by the Weekly World News on November 9, 1993 for front-page article, "Half-human, half-alligator discovered in Florida swamp.] The periodical subsequently reported on his escape from captivity, killing of a Miami man, and giving birth.
Jake has acquired a cult following in Northwestern popular culture. His 75th birthday party is held annually in early August on the peninsula, and features events such as a bachelor party, car show, bridal contest, and live music. Bumper stickers featuring the oddity can be commonly seen throughout Washington and Oregon
No one has come forward to claim credit for creating Jake.

HALF HUMAN / HALF ALLIGATOR FOUND - real or fake? 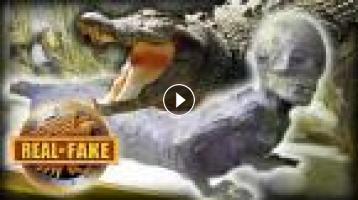 Stop by my Facebook for daily "real or fake" pics and vids Link to DDPYOGA In this video we're looking into a very strange mummy that appear...