Thousands of US Teachers Lose Jobs as States Cut Budgets

star
This is the VOA Special English Education Report, from http://voaspecialenglish.com | http://facebook.com/voalearningenglishAmerica's recession ended in June of two thousand nine but recovery has been slow. Many states face budget problems and have cut spending in areas including education. In California, thousands of teachers have lost their jobs. Sixty percent of the teachers at the Mariposa-Nabi primary school in Los Angeles have received dismissal notices.Salvador Rodriguez, the school principal, has been able to provide computers for his students. "We have to keep going and make it the best year possible with all these changes," he says. But fewer teachers mean bigger classes at his school. Mr. Rodriguez says there used to be twenty students to a teacher. By next year, he expects nearly thirty students in a class. Fewer teachers also mean less individual attention. Teachers say this is true especially in schools with large immigrant populations where English is not the first language of many students.Los Angeles has the nation's second-largest public school system after New York City. The district has dismissed ten to twelve percent of its staff during the past two years. John Deasy, the head of the Los Angeles Unified School District, says about half of those laid off were teachers.An educationprofessor at the University of California, Los Angeles, John Rogers, says other states have also laid off teachers. But he says the situation in California is worse because the state was already facing a budget deficit before the recession. Also, California was spending less per student than the national average. Primary and secondary schools in California receive most of their funding from the state government. AJ Duffy is president of the United Teachers Los Angeles union. Mr. Duffy says the amount of funding each year depends on the economy. He says: "In the past two and a half to three years, we've lost twenty billion dollars in funding for public education."Superintendent John Deasy says the jobs of school librarians and nurses are also being cut. And he expects more changes if the state budget does not improve -- like closing or combining schools.Most California school districtshave already reduced the number of days per year that students must attend classes. Other states are also talking about shortening the school year to save money. For VOA Special English, I'm Carol Presutti. For more education news and for English teaching activities, go to voaspecialenglish.com.

(Adapted from a radio program broadcast 04May2011)

Thousands of US Teachers Lose Jobs as States Cut Budgets 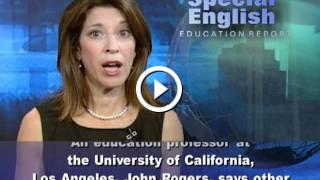 This is the VOA Special English Education Report, from http://voaspecialenglish.com | http://facebook.com/voalearningenglishAmerica's recession ended ...