Some Websites Judge You by the Kind of Computer You Use

star
This is the VOA Special English Technology Report, from http://voaspecialenglish.com | http://facebook.com/voalearningenglish

Recently the Wall Street Journal had a report about the online travel company Orbitz. The newspaper said Orbitz shows Mac users higher-priced travel choices at the top of search results than users of Windows. The company began doing this after research suggested that people who use Mac computers spend up to thirty percent more for hotels than people with PCs. Former Orbitz employee Cameron Yuill is chief executive of a digital media and technology company called AdGent. He says, "Mac users tend to be more affluent than PC users, so why not target them with the messages that are going to resonate with them?" This kind of price discrimination is also known as dynamic pricing. Cameron Yuill says it is a very common marketing tool, especially in the travel industry. He puts it this way, "Next time you're on a flight, ask the person next to you what they paid for their ticket." For example, if you are a business traveler or you bought your ticket at the last minute, you will always get charged more. Companies have always gathered information about their customers. But now they have a lot more ways to do it. Eric Martin is a partner at Boost Partners, a management consulting company. He says a salesperson in a store can only assume certain things about you based on your appearance. Online sellers, however, have far more information to work with, including information about which website directed you to them. Eric Martin says, "The people that you deal with you online can't see you at all physically. But they know that, for instance, when you came to Orbitz you may have been directed there by Kayak." Kayak is itself a comparison site, and that may then lead Orbitz to believe that you're searching for deals. Information about the referring site is only one of the things that a site like Orbitz will consider. Is the person a return visitor? Which hotels has this person viewed in the past? Websites collect this kind of information by placing small files known as cookies on a person's computer. In the case of Orbitz, Mac and PC users were actually given the same choices. However, they appeared in different orders. For Mac users, the higher-priced hotels showed up higher in the search results. Orbitz says ninety percent of its users book a hotel that appears on the first page, and mostly in the top five listings. For VOA Special English, I'm Mario Ritter. (Adapted from a radio program broadcast 02Jul2012)

Some Websites Judge You by the Kind of Computer You Use 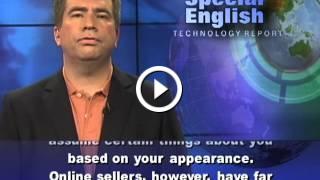 This is the VOA Special English Technology Report, from http://voaspecialenglish.com | http://facebook.com/voalearningenglish Recently the Wall Street...