15,000 Websites That Spread Terror and Hate

star
This is the VOA Special English Technology Report, from http://voaspecialenglish.com | http://facebook.com/voalearningenglish

Hate groups and terrorists are increasingly using the Internet to spread their beliefs. The Simon Wiesenthal Center based in California says the problem is getting worse. The center has released its latest "Digital Terror and Hate" report. Rick Eaton is a researcher with the group. He says the Internet offers a lot of information not only about things like making explosives, but also about kidnapping and guerrilla warfare. And many times, he says, this information is connected with political philosophy on not only how to do it, but where you should do it and what targets you should attack. The new report identified about fifteen thousand websites considered problematic. They included news groups, social network pages, YouTube videos and games that could incite hatred. Officials say there was only one such website when the center first launched the project in nineteen ninety-five. Rick Eaton says al-Qaida was one of the first terrorist groups to use digital technology. He says the group's online presence continues to grow. The Simon Wiesenthal Center is a Jewish human rights organization. This is its fourteenth year reporting on Internet terror and hate. Rabbi Abraham Cooper is associate dean of the center. He says hate websites increasingly target religious minorities. In his words: "Whether it's a hate crime in the United States or if you're looking at the targeting of Christians from Nigeria, the Coptic Christians in Egypt, what's happened in Iraq, right through to Afghanistan and Pakistan, you have the targeting of millions of people." Rabbi Cooper says we must all take part in solving the problem of Internet terror and hate. He says people need to recognize when websites cross the line from free speech to targeting groups for discrimination and violence. He also says religious and ethnic leaders must work together to condemn all forms of hatred.In his words, "We have to stand up for our own rights and our own communities." He is especially concerned about websites that call for individual acts of violence by people without ties to terrorist organizations. He says such websites are even more worrying because they are harder for law enforcement officials to identify. The new "Digital Terror and Hate" report is the first to be offered to law enforcement officials through an online app that provides up-to-date listings. For VOA Special English, I'm Carolyn Presutti. (Adapted from a radio program broadcast 16Apr2012)

15,000 Websites That Spread Terror and Hate 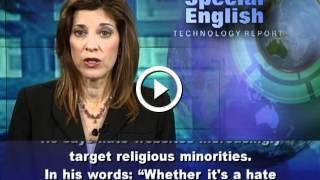 This is the VOA Special English Technology Report, from http://voaspecialenglish.com | http://facebook.com/voalearningenglish Hate groups and terroris...