lily
James asks Saoirse Ronan about being in Ed Sheeran's music video for "Galway Girl" and writing his tattoo as "Galway Grill." 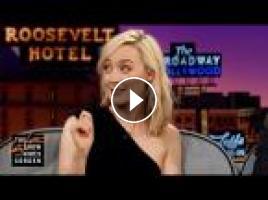 James asks Saoirse Ronan about being in Ed Sheeran's music video for "Galway Girl" and writing his tattoo as "Galway Grill."More L...