Half of US Jobs Now Held by Women

Added 6 years ago by star
496 Views
This is the VOA Special English Economics Report, from http://voaspecialenglish.comWomen are on their way to holding more than half of all American jobs. The latest government report shows that their share of nonfarm jobs nearly reached fifty percent in September.

Not only have more and more women entered the labor market over the years, but the recession has been harder on men. In October, the unemployment rate for men was almost eleven percent, compared to eight percent for women.

Industries that traditionally use lots of men have suffered deep cuts. For example, manufacturing and building lost more jobs in October. But health care and temporary employment services have had job growth. Both of those industries employ high percentages of women.

Thirty years ago, women earned sixty-two cents for every dollar that men earned. Now, for those who usually work full time, women earn about eighty percent of what men earn. And women hold fifty-one percent of good-payingmanagement and professional jobs.

Yet a study released in November said men still hold about nine out of every ten top positions at the four hundred largest companies in California. The results have remained largely unchanged in five years of studies from the University of California, Davis.

Also, a new research paper in the journal Sex Roles looks at the experiences of women who are the main earners in their family. Rebecca Meisenbach at the University of Missouri in Columbia interviewed fifteen women. She found they all valued their independence and many enjoyed having the power of control, though not all wanted it.

But they also felt pressure, worry and guilt. That was partly because of cultural expectations that working women will still take care of the children. Also, men who are not the main earners may feel threatened.

The job market continues to suffer the effects of lastyear's financial crash. Now, a judgment has been reached in the first case involving charges of criminal wrongdoing on Wall Street. The government lost its case against two managers at Bear Stearns, the first investment bank to fail last year.

A jury found Ralph Cioffi and Matthew Tannin not guilty of lying to investors. The hedge funds they supervised lost their value in two thousand seven. But jurors said there was no clear evidence that they meant to mislead investors. The Justice Department continues to investigate other companies.

Half of US Jobs Now Held by Women 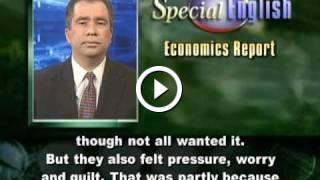 This is the VOA Special English Economics Report, from http://voaspecialenglish.comWomen are on their way to holding more than half of all American jo...