lily
Learn English vocabulary to talk about the news. Singer Beyonce released a new song titled 'Black Parade' on Juneteenth – Friday 19th June – the anniversary of the end of slavery in the USA. She also announced a project by the same name to support black-owned businesses. Neil and Georgina look at the vocabulary in the news around this story.

Beyonce released a surprise new song on Friday just because she can, because she is Beyonce. She’s released a surprise new song titled Black Parade, shortly after announcing a project by the same name to support black-owned businesses. Beyonce chose Juneteenth, a holiday celebrated in America to mark the official end of slavery, and she released the track on this day. So the song is called Black Parade. It includes very powerful lyrics about black history, police brutality and the George Floyd protests.

Vocabulary
spotlight
draw attention to an issue
• The football star helped to spotlight child poverty.
• The actor was in the spotlight after winning an Oscar for her debut film.

benefit
describes something which raises money for a cause
• The star organised the benefit track for victims.
• The benefit match raised millions for climate change

in honor (or: honour) of
to show admiration or respect for someone or something
• The prize was given in honor of the writer.
• A statue was put up in honor of the activist. 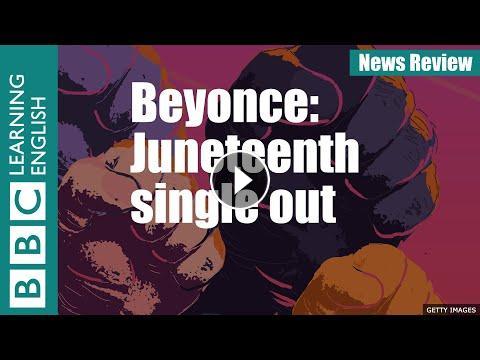