Elizabeth Marafino is a second-year graduate theatre student at Villanova University and production assistant at Villanova Theatre. She earned her B.A. in Communication with a concentration in Performance Studies from Villanova University in 2012 with minors in English and Theatre. In her undergraduate career, she served as the President of Villanova Student Theatre, producing and directing several plays, including Don't Drink the Water and The Complete Works of Shakespeare (Abridged). She also currently serves on The Mountain Playhouse's Programming Committee, bringing theatre to rural communities of western Pennsylvania. When not constantly surrounding her work life with theatre, she can be seen going to plays in the greater Philadelphia Area. Though only a young whippersnapper, her dream is to revitalize theatre in rural America by sharing stories that matter most to these communities. Her dream vacation would be a month in the Aran Islands. Elizabeth's hidden talent is making owl noises through cupped hands. Her personal motto is "Mistakes are Opportunities".

Polly Rose Edelstein is a second-year graduate theatre student at Villanova University and set assistant in the scene shop at Villanova Theatre. She earned her B.F.A. in Theatre from Stephens College with a minor in music. Polly moved to Philadelphia in 2010 and has worked as a theater teaching artist, director, and theater professional in and around the area. When not perched atop a ladder in the theater, you can see Polly hanging around West Philly coffee shops and seeing plays downtown. Her big dream is to artistic direct her own successful theater company that is dedicated to showcasing women in theater.

Lauren Fanslau is a second-year Master's candidate in Villanova's Theatre program and is also a graduate assistant in set construction. Prior to attending Villanova, Lauren received her B.A. in Theatre/Education from DeSales University in Center Valley, PA. After graduating, Lauren taught and directed in several schools and drama programs throughout the Lehigh Valley and Philadelphia areas: East Penn and Parkland School Districts, The Civic Theatre, The Music Training Center, and Allens Lane Arts Center. Lauren had the privilege of performing in several mainstage productions during her first year at Villanova, including The Drowsy Chaperone, The Beautiful Life of the Woman Komachi, and Salome, and is now in the middle of performing in the current production: Everyman. This past summer, Lauren was able to live and work at the Abbey Theatre in Dublin, Ireland, thanks to a grant provided by the Villanova/Abbey Theatre exchange. She worked in four different departments at the Abbey Theatre (or National Theatre of Ireland), including Casting, Properties, Voice, and Community/Education. Lauren has found her overall experience with Villanova University and, specifically, her involvement in the Graduate Theatre 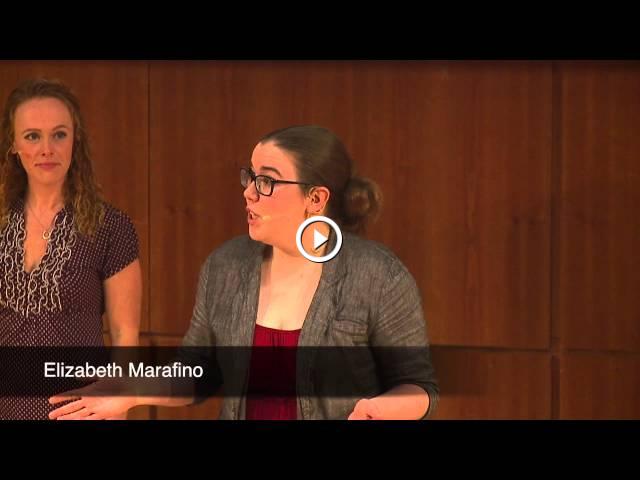