The Voice 2018 - Behind The Voice: Team Alicia (Digital Exclusive)

Added 1 year ago by lily
61 Views
Find out some crazy facts about Team Alicia... and did Alicia Keys really save Shawn Mendes' life?
» Get The Voice Official App:
» Subscribe for More:
» Watch The Voice Mondays & Tuesdays 8/7c on NBC!
» Watch Full Episodes:
THE VOICE ON SOCIAL:
Like The Voice:
Follow The Voice:
The Voice Tumblr:
Follow The Voice on Instagram:
NBC’s The Voice follows the strongest vocalists from across the country and invites them to compete in this season's blockbuster vocal competition.
Find The Voice trailers, full episode highlights, previews, promos, clips, and digital exclusives here.
NBC ON SOCIAL:
NBC YouTube:
Like NBC:
Follow NBC:
NBC Tumblr:
NBC Google+:
NBC Instagram:
ABOUT THE VOICE
The Voice 2018 USA YouTube channel features exclusive content with The Voice coaches, highlights from The Voice auditions, interviews with The Voice winners, as well as The Voice recaps and results. Learn more about The Voice contestants, The Voice tour, the eliminations, and follow your favorite performers all the way to the finale. In season 14, Kelly Clarkson joins returning coaches Adam Levine, Blake Shelton, and welcomes back Alicia Keys as celebrity musician coaches, while Carson Daly continues to serve as host. The show’s innovative format features five stages of competition: the first begins with the blind auditions, followed by the battle rounds, the knockouts, the live playoffs and finally, the live performance shows.
The Voice 2018 - Behind The Voice: Team Alicia (Digital Exclusive)
The Voice

The Voice 2018 - Behind The Voice: Team Alicia (Digital Exclusive) 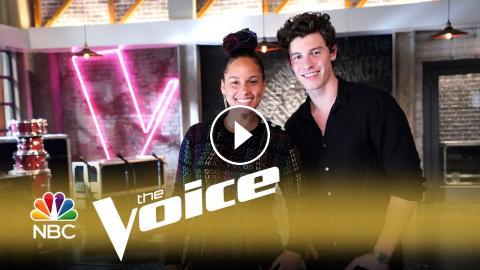 Find out some crazy facts about Team Alicia... and did Alicia Keys really save Shawn Mendes' life?» Get The Voice Official App: » Subscribe for More: ...