Sometimes you are faced with a tragedy or a misfortune.The word catastrophe basically means an event resulting in a great loss or a disaster. A bad event that causes a lot of suffering to many people is a catastrophe. It could be a natural calamity such as a storm or an earthquake.

So when you describe something as catastrophic, it means that it is very bad or unsuccessful. It is a huge problem you have to deal with.A sudden violent change in the earth's surface is also known s catastrophe.

For example, the Japan earthquake of 2011 was a catastrophe as it claimed lives of many people and left many homeless.

Example 01 : William was the only earning member in his family, his death in a road accident was a catastrophe for his family.

Example 02 : Peter told his wife, " Lack of funds has resulted in a catastrophe for our children's education."

Example 03 : Thecoach told his team players, " This is our last chance, it would be a catastrophe if we didn't qualify for the world cup."

Example 04 : The quarreling ladies made the whole dinner party a catastrophe.

Example 05 : The Black Sea is facing an ecological catastrophe as a result of pollution.

Example06 : The company's catastrophic losses left the shareholders displeased as they were not entitled to any dividend this year.

Example 07 : The sinking of the cargo ship was a major catastrophe for the shipping company.

Example 09 : The catastrophic hurricane left the people helpless and devastated.

Example 10 : The catastrophic effects of global warming has resulted in changes in the climatic conditions globally.

How to speak fluent English 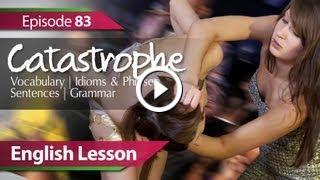