CONFUSING RIDDLES TO TEST YOUR ATTENTIVENESS

AVA
Subscribe to 7-Second Riddles: https://goo.gl/BZSTVh and test your attentiveness with these confusing riddles! These puzzles and brain games with answers are pretty simple but only for those who have a high IQ score and a well-trained brain! Tricky riddles and brain teasers will help you improve your critical thinking ability. So if you feel bored or exhausted, try these cool riddles to wake up and test your brain:

00:00 - Editor: “Check it out! I just revealed that superstar Bill Dirk...is a werewolf!”
Editor: “And Ella Riley cheated on her husband!”
Amber: “But they had 5 kids!”
Editor: “Yeah! EEEEpic divorce! Thanks to me.”
Editor: “Go and find me some more juicy gossip!”
Amber’s heading to her 1st Hollywood party. Wish her luck!

00:50 - Warm up your brain with this tricky puzzle! Amber: “Wow! It’s Bread Hole, the famous actor!”
Editor: "He just got divorced. Find out if he’s secretly dating anyone!
3 women are all over him. Who’s he dating?

01:41 - Speed up your brain! Amber looked around. The couple...where were they? Hm... one couple in a bathroom stall. Someone’s in the basement, behind that door. Someone’s on the roof. Where are they?

02:38 - Test your intelligence! 2 celebs are pregnant. Movie star Billie Jean...and Bachelorette winner Kate Stone.
Editor: I bet one of them’s faking their pregnancy! Go check it out!
Amber followed them. Billie and Kate had some drinks. Then Billie felt sick. Amber caught them both coming out of the bathrooms. Are they really pregnant?

03:45 - Boost your thinking! Aha! The cast of “Vampire Notes”.
Editor: They say one of them is a real vampire! Be careful! The lead actor. His glass...looks suspicious! An actress and her boyfriend. They’re in love! How cute... The director! His costume though... Who’s the vampire?

04:34 - Test your logical skills! What a nice couple! He plays football. She’s a model.
Editor: They’re not together! They just want to get into a magazine!
Amber: I’m from Juicy Gossip. Tell me about your love.
Model: Just look! We were in the same kindergarten...
Football player: Years later we met in Egypt. We stayed in the same hotel.
Model: And fell in love immediately!
Are they telling the truth?

05:38 - Boost your attentiveness to the details! Lady Daga! Everyone wants to know about her new boyfriend.
Editor: Find out everything!
Amber: Hm... what’s wrong with the couple?

06:17 - Another brain teaser to test your IQ! Editor: I have a new secret weapon...a truth potion.
Amber: Wow! That’ll make my job way easier!
Editor: The manufacturer sent me a hint. The potion’s in that dish.
What is it?

06:46 - Think critically to solve this riddle! Not a great start... Someone already ate some rings! 3 people were close to the table. Who took the truth potion?
Waiter: I’m so lonely, never had a girlfriend, never been married. Will you go out with me?
Actress: I’m an animal activist. Please interview me!
Security guard: I put a bomb in the basement! I’ll blow us all up, then I’ll be famous!
Who’s telling the truth?

07:49 - This short puzzle will boost your thinking! Amber ran down to the basement. She’s gotta cut the right wire...Or... Luckily, there is a hint. Which wire should she cut?

08:25 - Now you have to make the difficult choice...
Amber’s a hero! But some celebs still weren’t happy with her...
Bread Hole: I’ll sue you if you publish those pics!
Lady Daga: I’ll give you $3000 to stay quiet!
Vampire-actress: I’ll bite you if you reveal my secret!
Should Amber LISTEN to them? Or should she PUBLISH the juicy gossip? SHARE your OPINION in the COMMENTS

CONFUSING RIDDLES TO TEST YOUR ATTENTIVENESS 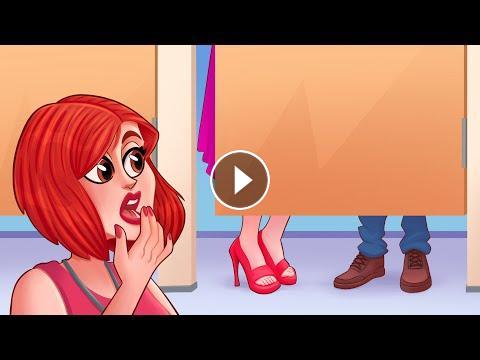 Subscribe to 7-Second Riddles: https://goo.gl/BZSTVh and test your attentiveness with these confusing riddles! These puzzles and brain games with answ...