Added 6 years ago by star
430 Views
his is the VOA Special English Education Report, from http://voaspecialenglish.com | http://facebook.com/voalearningenglishHult International Business School has campuses in Boston, San Francisco, London, Dubai and Shanghai. The Hult Global Case Challenge is a competition based on the idea that solving world problems requires a good business plan. Teams compete for prizes of one million dollars to help an organizationwith efforts to solve problems like hunger, poverty and disease. A Hult student, Ahmad Ashkar, created the challenge for teams from business schools around the world. This year's challenge deals with poverty. Teams will compete to develop business plans for three nongovernmental organizations. SolarAid works on energy projects in east and southern Africa. Habitat for Humanity builds low-cost housing. And One Laptop Per Child builds computers for governments in developing countries to supply to poor communities. That group is taking part in the competition for the second time.David Batley fromSolarAid says his group works with local entrepreneurs to bring power from the sun to rural communities. "I think the winning team will be one that uses a combination of really innovative thinking and taking account of the practicalities of operating in Africa and the challenges that that represents." Sandy Parakilas took part in the first competition in two thousand nine. The challenge that year was to help an organization reach one hundred million people in five years. One of the three top prizes went to his team from Carnegie Mellon University for their business plan for One Laptop Per Child. "They were struggling with competition from Microsoft and Intel. And they were having trouble basically making money. So it was a great opportunity for some business students to come in and create some ideas for a not-for-profit to be more profitable, essentially." Howard McNally is chief executive officer of the Hult Global Challenge. He says, "It's the equivalent of about twenty thousand hours of consulting advice from the world's smartest, youngest people." Mr. McNally says the students learn about world problems and the opportunities that might be available for them in the market. "Andit's also a tremendous opportunity for the NGOs that we're working with to get the kind of advice that they're going to get about their vision and their goals." The five Hult campuses will hold regional competitions in February. Finalists will be chosen in New York in April. For VOA Special English, I'm Alex Villarreal. 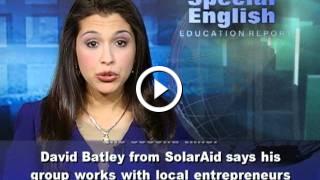 his is the VOA Special English Education Report, from http://voaspecialenglish.com | http://facebook.com/voalearningenglishHult International Business...