Best To Worst Dressed At The 2020 Oscars

AVA
The Oscars are Hollywood's biggest awards show, and an endless parade of A-listers showed up, braving the rain to show off their fashion choices. As with the awards, some won big, while others... did not. Here are some of the most notable outfits ranked from best to worst.

Scarlett Johansson was nominated for not one but two Oscars this year, as Marriage Story landed her a Best Actress nom while Jojo Rabbit snagged her a Best Supporting Actress nod. The last time such a feat was accomplished was over a decade ago when Cate Blanchett was nominated for Elizabeth: The Golden Age and I'm Not There in 2008. Just like Blanchett, Johansson went home without a trophy for either category, but that didn't mean she wasn't dressed like a winner.

The 35-year-old wowed in a metallic Oscar de la Renta gown that was certainly worthy of her history-making status as a double nominee. Featuring a bodice made of mesh covered in beautifully draped silver strands and a champagne-colored skirt with a short train, the dress made Johansson glow.

Adding to the drama were her sparkling diamond drop earrings, a diamond bracelet, and her massive engagement ring.

The gown was also a perfect choice to show off her massive back tattoo, which consists of a pattern of roses in honor of her daughter Rose, as well as a lamb next to the flowers.

Watch the video for more about best to worst dressed at the 2020 Oscars!

Best To Worst Dressed At The 2020 Oscars 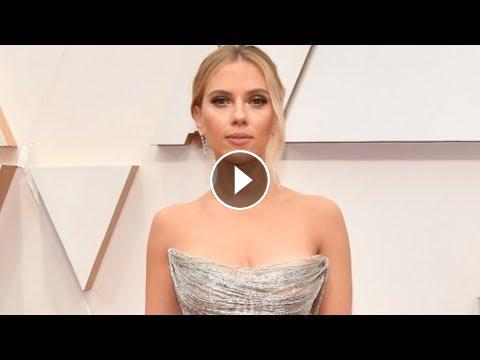 The Oscars are Hollywood's biggest awards show, and an endless parade of A-listers showed up, braving the rain to show off their fashion choices. As w...